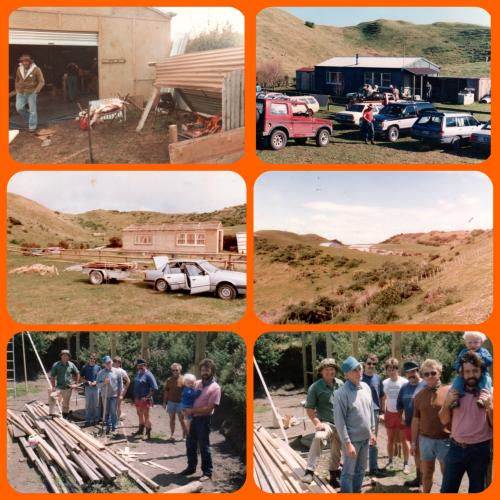 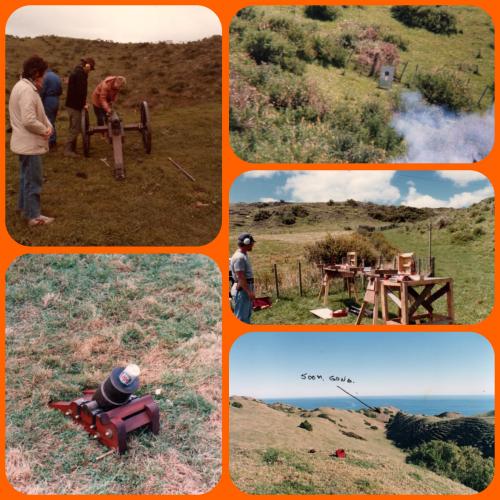 1985 – Ranges approved by the New Zealand Pistol Association for use of center-fire pistols. 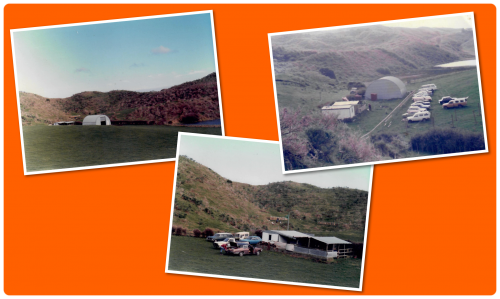 The original Waiuku Black Powder Arms Club was formed in 1979 in the engineering workshop of Waiuku College during a metalwork night class run by local teacher Peter Hook. Several members of the class expressed an interest in assembling kitset Black Powder muskets so a variety were ordered and duly assembled. An advertised meeting was held in a classroom at the College and the Club was formed. Initially the Waiuku Black Powder Arms Club shot at the farm of one of the members, but decided that the 100 yd. range there did not have a good enough safety profile. Members then carried out shoots over many farms on the Awhitu Peninsula, as the club sought a permanent site.

During that period Tom Dawson and Peter Hook toured most of the hill country on the peninsula in Tom’s jeep looking for a safe, permanent site with a good safety profile, well away from housing, that could be approved as a range site.

After a very rough ride up Bothwell Park Road, which was an unformed clay road, they came to the junction of two other clay roads adjacent to Parkinsons Lake. Further exploration of this area led Tom and Peter to what they considered to be a perfect site for the proposed range.

At that time the land was owned and used as a winter run-off by a local dairy farmer. After negotiations with the landowner, Peter made an application to the Franklin County Council, for the land to be declared as a rifle, pistol, cannon, and shot gun range, which was approved on 28 May 1982. The club was registered as an Incorporated Society and adopted a formal constitution and was called the Waiuku Black Powder Arms Club. It was affiliated to the New Zealand Black Powder Federation and had around 20 members.

In the early days access to the range was limited to 4 wheel drive or cars that could be fitted with chains to handle the rough road conditions and mud in the winter. To provide access the Club upgraded the track to provide a gravel road to the range in 1984.

In 1985, the ranges were approved by the New Zealand Pistol Association (now Pistol New Zealand) for center-fire pistols and re-named the Waiuku Pistol Club. As the club was now no longer limited to black powder firearms, this lead to an increase in membership in the following year, to around 60. The old converted garage that had been the clubhouse was demolished and the present clubhouse built at a series of major working bees.

As interest grew and NZPA (Pistol NZ) matches were added to the club programme the membership continued to grow to around 100 by 1990.

To cater for the range of disciplines, a series of ‘sections’ were established to organize regular club matches and ensure they were run according to the relevant rules. Club members frequently traveled to shoots at other clubs as well as competing with success at regional and national championships.

In 1995 – 6 the site was leveled and developed to sub-divide the 100 and 50 yard ranges into the current configuration of 5 ranges. Local contractors contributed a huge amount of time and labour as well as use of their machinery. Members also contributed their time and labour to the massive task of casting and erecting the concrete range walls. As a recognized recreational facility in the Franklin District, the club received a grant from Council to contribute to the costs of this work and the ranges were re-certified by the NZPA (Pistol NZ) as meeting all safety requirements. The club-house was upgraded with the installation of toilets, septic tanks and approved fire egress etc. so it complied with council requirements to be recorded as permitted structure. Membership grew to around 200 at this time.

In December 2000 WPC celebrated its 21st Anniversary, the Mayor and Councilors were guests and the event was featured in the local paper.

In 2002 a local resident who objected to the Club’s activities began a campaign of complaints to the Franklin District Council. Numerous meetings followed with Council Officers culminating in a threat to issue an abatement order and also a challenge to the original 1982 Consent that the club had been operating with. These were averted by the Committee through negotiations and securing a legal opinion that disputed and for the time being negated the Council’s challenge. Negotiations and meetings with Council continued for the next four years as the resident continued his campaign through Council Officers. Around this time the Club was also informed that the land was being developed into lifestyle blocks for sale. This was going to be a long-term project and there was a current lease held by the Club.

Despite all this the Club was in good heart – it was financially sound so could continue to develop facilities. Shooting sections included IPSC, NRA, Service Pistol, Cowboy Action, Black Powder, Silhouette, Shotgun and Rifle. Membership was stable at around 200. A Committee member was certified by the NZPA (Pistol New Zealand) to do Holster Training as well as to train and Certify Club Action R.O.’s so the Club was able to do this in house no longer had to send members to away courses.

In 2008 the local resident initiated proceedings in the Environment Court. After the mandatory mediation process failed, the Club was faced with two choices – either go to the Environment Court and defend the existing consent which had been issued under the Town And Country Planning Act, or apply for a new Consent which would deal with changes in scope and range of activities at the Club. On legal advice the latter course of action was decided.

A new consent was issued in August 2010. The Committee members who had been dealing with this were exhausted and despite extra contributions by members, the Club was left broke and still owing the Council money for some of their fees and costs. Then a final blow landed when the landowners announced they were not renewing the lease, which expired at the end of 2010, and were not interested in selling the land to the club. When this news went to the membership many left as theythought the club had no future and membership dropped to under 100.

Two senior club members got together and agreed that unless they took matters in hand the club was doomed.

They recognized that the only way forward was to manage the club’s affairs as a business is managed and they set about implementing a 5 year strategic plan.

Further negotiations with the landowners secured a 6 month extension to the lease in 2011 while a sub-committee investigated ways to purchase the land. At the same time options were explored for other sites. Nothing suitable that didn’t involve major costs could be found. Agreement to purchase was unable to be reached with the landowners but a new 5 year lease was agreed.

With this lease secured the Club Committee set out to rebuild membership by actively marketing the club and membership as this would build it’s financial reserves to be in a position to make a future offer to purchase.

Membership grew each year to over 450 by mid-2017 and the Club was again in a healthy financial position.

During this time a new Constitution was adopted which replaced the original 34 year old one that had become outdated and restrictive in how the club was now managed.

Amendments to some of the very restrictive aspects of the 2010 consent were negotiated and approved by the Waikato District Council, which gave flexibility for more matches to be run by the various club sections.

To cater for the growing membership and increasing number of new pistol shooters the number of club trainers and holster instructors was significantly increased. This group ensures high standards of safety awareness and practice are developed and maintained by all members.

In 2016 the land was re-marketed by the landowners who said they would sell to the Club if their price could be met. The WPC Charitable Trust was set up in order to secure the necessary finance to complete the purchase and to act as the nominal land-owner.

A number of club members donated $1000 each to the Trust.  Without these donations it would not have been possible for the trust to complete the purchase. A commemorative board recording the names of these club members is be installed in the club rooms to acknowledge these members.

The purpose of the trust, as stated in its deed is, “To acquire the land presently leased by the Waiuku Pistol Club Incorporated and to lease that land to WPC on a long-term basis – to ensure WPC has security of tenure and is thereby able to meet the foregoing primary charitable purposes indefinitely.”

The 5 Trustees are all long standing Club members, and include 3 past presidents, a retired police officer and a lawyer.

After protracted negotiations the purchase went unconditional in June 2017.

This means the Club can now plan long term for its future including expanding the programme of shoots and upgrading facilities.